We had a great little mini holiday this weekend. We went to stay at mum and Peter’s place for a couple of days, just to get away. It’s the only weekend we have (pretty much) free between now and September so we made the most of it.

We drove up on Friday night to make the most of our time. The kids were most excited we stopped at a pizerria for dinner, they’ve been saying the word with Italian accents all weekend. I ended up watching the Tigers win a thriller while everyone else was fast asleep. I may have kissed their television when Jack kicked the goal that put us back in front.

Saturday we spent just ‘doin stuff’. A bit of shopping, some relaxing, a visit to Aunty Katey for a quick trip back in time, some lunch and then afternoon tea with three out of my four sisters – such a rare event. Saturday night we watched When Harry Met Sally. Well, half watch and Rae half recited. As we’d been a little bit lazy I made Rae do some lunges and push ups. Rae had never done lunges before. She may forgive eventually, but we felt a lot better afterwards.

This morning we woke to a beautiful sunrise, mist covered fields, chirping birds and insane giggles from boisterous boys. It was the kids treat this morning, breakfast at Maccas. I’ve heard that if you ‘accidentally’ leave your kids behind at Maccas then McDonalds will raise them until the age of 18. It was so tempting to see if this was true today, sorry fellow patrons, especially if you were nursing a hang over. Shopping, a quick trip to rescue a lost dinosaur from Aunty Helly’s, a lot more relaxing and then it was time to hit the road back home.

It was only really a day and a half but it feels like we had a week away. Just being away from home, and the usual routine, has recharged the batteries a little so now it’s full steam ahead for the second half of the year. 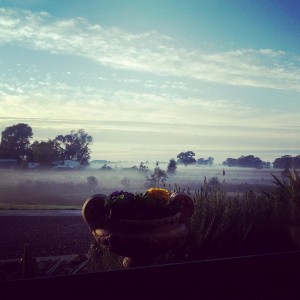