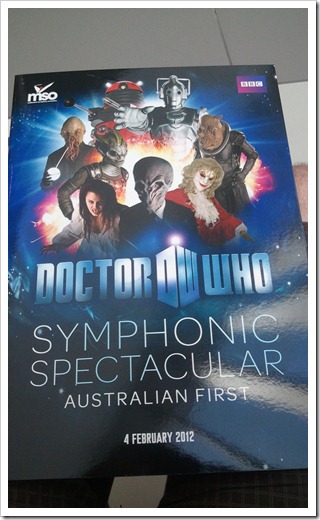 I’m just back from attending The Doctor Who Symphonic Spectacular with Daniel Bowen and his boys. It lived up to its name, the event was truly spectacular. The music was amazing and the guest appearances by Matt Smith (via video) and Cybermen, Sularians, Judoon, vampires, Ood and The Silence (in the metal/flesh/slimy scales) kept everyone entertained. The composer, Murray Gold was there too and would have to have been thrilled with the reception for his music.  Funniest part was when there was a technical hiccup that delayed one piece from starting. Suddenly, and completely unprompted, dozens of sonic screwdrivers were being waved in the air by audience members, buzzing away to try and help. It was wonderful to see and got a round of applause.

What truly amazed me though were the fans. Growing up Doctor Who was such a cult show I could never have dreamed of being in the same room with ten, let alone 1500 other Who fans. They ranged from a baby to seniors. There were bow ties aplenty, great home made outfits and a few spot on Tennant’s wandering around. I couldn’t help but smile at the thought that my show is now so popular.

The second most popular sequence, after Matt Smith’s video, would have been a montage of all of the regenerations starting with William Hartnell. Using the purely unscientific method of me listening to the applause and shrieks David Tennant is the most popular doctor, Matt Smith a very close second. My poor Peter Davison trailed a long way behind. SIgh. I do wonder how many of the young fans wondered who on earth Paul McGann was when he popped up.

One fan stood out for me though, he was wearing a Sylvester McCoy t-shirt. He must have been hanging on to that baby for over 20 years just waiting for the day. To you sir, I tip my fez.

One Reply to “Who”