I had a little adventure a little over a week ago, one I wouldn’t recommend.

It began on Sunday morning when I woke up with a seized back, I could barely walk. Of course I let Rae know about it as we ate breakfast and she just rolled her eyes listening to me whinge again. That pain went away as I read the paper and all was good. For a few minutes. Suddenly I was whacked between the shoulder blades, up my neck and across my chest with the most horrific pain. I couldn’t move without the pain getting worse and lying down or leaning on my side made the pain even more intense.

Being the bloke I am I ignored it. Do not do this if you’re playing along at home.

For the next few hours I tried to stay still and complained to Rae that I wasn’t feeling well. I couldn’t lie down so I thought I’d eventually try and ignore the iron bar being pressed across my chest and do some work. This didn’t distract me so three or so hours after the pain began I thought I’d call Nurse On Call and they’d tell me not to worry, it will go away.

Three minutes in to the call Dianne said “Mr Malloy. Based on what you have told me I am now calling you an ambulance. If we are disconnected do not call us back. Call 000 straight away.”. Oh, that wasn’t what I was expecting. I went out to tell Rae that an ambulance was coming and she looked a little confused. It ends up I hadn’t told her my back had got better and she thought I’d just been complaining about a dodgy back all morning. The fact I thought I was having a heart attack came as a bit of a shock to her.

It took six minutes for the MICA guys to arrive. Six very long minutes. It was only now I began to feel worried. Rae locked up and we were ready when they arrived. As soon as the ambulance guy saw me he said “Wow, look at that.”. Apparently I had a vein fairly bulging out of my neck. They did a couple of quick checks and decided that even though I probably wasn’t having a heart attack they would treat it as such. In went the cannula, popped some pills under my tongue and wired me up to an ecg. They were amazing in how the went about their work, so calm and professional. 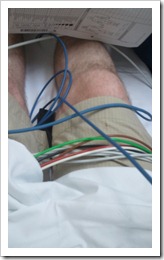 Before long I was in the back of the ambulance and off we went to Western Health. Along the way I had so many different drugs to treat the pain and blood pressure I lost count, but nothing could get my pressure under 202/120 (or it may have been 140, I was a bit distracted). They wheeled me in to Emergency and it was there I stayed for 19 very long hours on an emergency trolley. I was well looked after, that wasn’t an issue, but 19 hours on a trolley is a very long time. I was still having chest pain and nothing they tried could get my pressure down to what they wanted.

After a while I realised i was probably going to be okay, they thought it may have been pericarditis, and I decided I’d give an old mate a call. Prakash was a cardiologist I worked with at Cabrini and I knew he’d have a chat to me once I was out. I had a chest x-ray before too long, even though I could barely stand up, and then back to the ED

That first night was shocking, barely any sleep at all as some very troubled souls made their way through the ward. At one stage I heard a nurse finally break and say “Look, you’re out of your head on ice. Shut up, we’re trying to help you.” Another guy kicked his table over, screaming at the nurses that no one was helping him and at 3.00am a patient’s phone went off so she had a yelling conversation for half an hour. It was not a good night.

The next morning I was still on the emergency trolley, still wearing the clothes I’d put on 24 hours before, when rounds started. The curtain pulled back and there was Prakash. Apparently he works at Western Health now and he was in charge! He tried to get me in to a private hospital but we’d stuffed up our policy about six months before so I stayed at Western Health. It was great to see a friendly face, and one obviously well respected by his students. 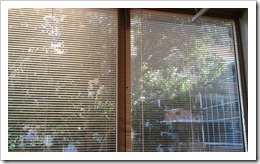 An hour later someone appeared at the end of my trolley. “You’re off to cardiac.” and off I went. As I was going to the cardiac ward I had to have someone come along with a crash cart, which was a bit alarming because at this stage I still had the pain across my chest and back. Once in the ward I had the luxury of a room to myself for a few hours. I saw sunlight for the first time in 19 hours, but the best part was being allowed to have a shower. You can feel pretty funky after a day and a half in the same clothes. I was then whisked away for an ecg

Before long I was sent off to a four bed ward to spend my first night. I was so tired I managed to sleep through the snoring of my neighbours, although being woken for bloods at some ungodly hour didn’t help. The second day I had a heart ultrasound to see what was going on. The answer was nothing. My heart was a robust picture of health but as the pain was still there and moving in to my jaw Prakash decided they needed to see what was going on with my arteries. 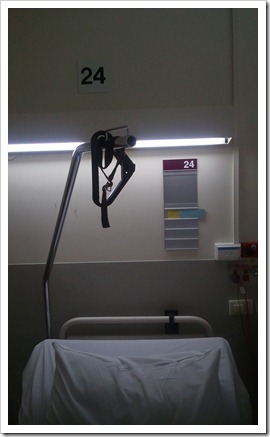 I had to wait until the next day to get my cardiac ct scan, and it took a couple of goes thanks to problems with getting needles to stay in my veins but when it was done it showed everything was clear. This was day three and the pain had finally subsided so with a prescription for four new drugs to try and keep my blood pressure lower than it had been I was sent home.

So, what happened? No one is sure. My blood pressure seems remarkably resistant to being lowered by any means and every scan or test I had came back clear. They started with cardiac issues, went to pericarditis then back to cardiac but couldn’t find the root cause of the pain. I have no doubt Prakash will send me off for further tests to try and figure out what’s happening and to stop it from happening again. The medication is having some effect, my blood pressure is lower now (although still not low enough)

The worse part for me was the stress I put Rae under. The poor thing, I never want to do that to her again. Plus she had to take time off work and run around for me. She’s an amazing woman and a wonderful wife. The whole experience would have been a lot worse without her love and support.

I also want to say thank you to friends and family for visits, messages and helping Rae out. It’s times like this great friends come to the fore, thank you.

What about the hospital? Once out of emergency I couldn’t fault the care from the dedicated nurses and staff. 19 hours is way too long to spend on an emergency trolley though. We’ve fixed up our insurance so hopefully we have more options should we have to find a hospital again. I would have gone insane without access to the world via my phone. Email, Facebook and Twitter are wonderful ways to take your mind off immediate problems and a lot cheaper way of passing the time than squinting at a tiny television that costs you $10 a day to view. I know I’m a telly snob but paying that much for a little 4:3 unit that doesn’t have all the channels…grrrrr.

Special mention must be made of the food. At least I think it was food, it was delivered at meal times so it must have been. Meal time is one of the few breaks in the boredom of staying in hospital and should be something to be looked forward to, not to be afraid of. To put it bluntly the food was absolutely terrible. Shocking. Bad beyond description. I worked in Food Service at a hospital 20+ years ago and we would have been sacked on the spot if we had tried to serve up that slop. I know public hospitals have to work to a tight budget but if you’re serving beans then don’t boil until they are a dull grey lump of slime. Try and make meat look like and taste like the meat you claim it to be. It must be terrible to be working in that kitchen if you care about your job. No one in charge could possibly care about what patients are getting. As Kim said, food is meant to nourish you, especially when you are ill. There was no nourishment to be had in what I was served and if it wasn’t for food brought in by Rae I would have been pretty poorly off. 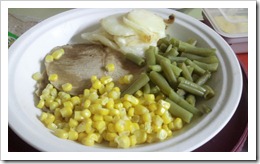 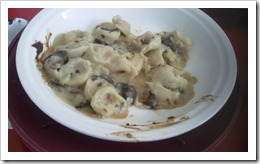 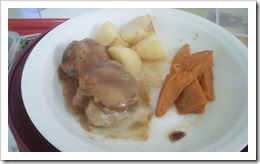 I have an appointment with my cardiologist in a couple of weeks, no doubt the adventure will continue. Until then I’m being sensible, doing as I’m told and hoping it never happens again (while jumping at any slight twinge).

5 Replies to “My Little Adventure”