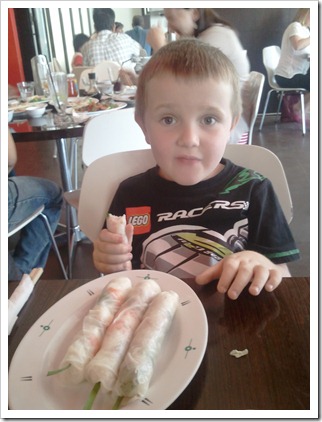 Some days are accidentally great.

The plan had been to take Bert to see Brickvention, an amazing Lego display put on by Lego enthusiasts. Bert loves his Lego as much as I did when I was a boy so I was very excited at the thought, until I saw the line. It snaked from the Town Hall door, down to Collins St, up to and around the corner to Russell, up around in to Little Collins and down past The Victoria Hotel – over half a kilometre around a city block – and this was half an hour after opening. Apparently, at that stage, the wait was 2 hours and during the day this rose to 4 hours at times.

Scratch that idea then.

So we moseyed on down to ACMI at Fed Square and took in the Dreams Come True exhibition from Disney. It was amazing, such stunning art work. I could have spent hours there but Bert was eager to move quickly from one area to the next. I may go back ,especially as I just discovered you can download the audio tour before you go. If you’re at all interested in animation, movie making or Disney you have to go.

After an all too brief look we decided it was lunch time and rice paper rolls sounded like a good idea so we headed off to Tho Tho’s, a favourite old haunt of mine. They’ve been open 21 years now and chatting to one of the original waiters he told me now the young people who went there when they first opened are now bringing their children. Made me smile.

Not even getting caught in city traffic on the way home made me grumpy. I got to spend a morning with just one child, a rare event, and loved every minute of it., even if we didn’t get to see the Lego.