This time last year I was a different person. I had recently had a pretty big scare, spending three days in hospital with a suspected heart attack. In the end it turned out my heart was the very picture of health and the massively elevated blood pressure and searing arm/chest pains were caused by….no one knows. I can remember standing at the window on one of my innumerable corridor shuffles looking out at a McDonalds sign in the distance whishing I could go get a Quarter Pounder.

Talk about not getting the message.

You’d think that this would have been enough to make me take a long hard look at myself. But it wasn’t. Not immediately. If I had have I would have seen an overweight forty one year old. 100kg, flabby, unfit and delusional. Maybe I knew that and maybe that’s why I didn’t look in that mirror. All too hard, have another hamburger and things will be okay.

But something had changed. It just took me a little longer to realise. The year prior to this I had met one inspirational woman and another friend was undergoing an amazing change. Kim from MetFitness told me the story of how she started her fitness business, how she lost a huge amount of weight after her pregnancy and about her new attitude to life. One thing that stuck was that she wanted to do a fitness course in New York but ‘she couldn’t possibly do that’, until she realised that the only thing stopping her was herself. The other inspiration was Ren. A long time friend who has undergone a stunning transformation through continued hard work and discipline. I’ve watched a completely different person, in so many ways, emerge over the past couple of years – you can’t be anything else but impressed with what she has achieved through shear force of will.

These were influences, bubbling away in the background, but it was something a bit closer to home that pushed me towards actually doing something; they built a gym just around the corner. For a week I wandered past the table in front of Coles advertising a new Jetts was opening soon. 24 hour access, no join up fees for foundation members and a free bag of goodies. The rates were cheap too but it was still five days before I picked up a brochure.

I had been to a gym before. 20 years ago I went for a few months and loved it until one bad session and I didn’t go back. I plonked the Jetts card on my desk and stared at it for another day or so before plucking up the courage to go in. I mean, at 100kg and as sedentary as you could possibly be, gyms can be a daunting place. I felt I would be judged, laughed at for even thinking of walking through the doors but walk through them I did. And I couldn’t have been more wrong. Travis, the manager, didn’t laugh. He shook my hand. He talked to me. No judgements, just asking what I wanted and I signed up on the spot.

The funny thing is I didn’t tell Rae. I still don’t know why, the most supportive person in my life but I still felt as though I didn’t belong at a gym, that I was an imposter, and that she would, I don’t know, not laugh, but think I was strange. I actually hid the registration form! It wasn’t until a couple of days later when we were picking up fish and chips (I know, the irony) that I confessed. She had previously mentioned about doing some exercise so I said we should go and have a look together, and we did, and she signed up to.

In retrospect that was probably the most important thing that happened. We were in it together now.

The gym opened in late March, we did the orientation and I decided to take up the offer of three personal trainer lessons, just to get me started. That was the second most important thing I did – having a motivator as brilliant as Adam. Mind you it didn’t feel like that at the time. I thought I was going to die after my first session and, yes, I did throw up on the way home. Looking back now it makes me laugh – he was only seeing what I could do and that was next to nothing. Push ups? No way. Weights? Wow, 2kg is so heavy. Jogging? 15 steps up and 15 steps back and I was puffing.

But this is where Kim and Ren came in to play. I looked to their example and I didn’t give in. I went back. And I started walking on the treadmill too. After my first few sessions I signed on for a training session each week. I wasn’t perfect, I postponed a couple of the early ones because I couldn’t face going. One morning I was doing the program Adam had set out for me when Travis came up., He had noticed I was resting my hand on my knee when I was doing step ups (no weights, just stepping up) and said “No shortcuts mate, get that hand off,”

Once upon a time I would have bucked against this sort of approach and said ‘stuff ya, I’m going home’. This is when I knew was committed. I took my hand off my knee and started again.

I threw myself in to the regime, determined not to slip up. I went six days a week, alternating between my program and walking on the treadmill. After a couple of months I remembered another source of inspiration – Mark who had completed C25K. This is a program to get you from the couch to running 5 kilometres in a graduated program. I had toyed with the idea a couple of years ago, even got as far as buying a pair of sneakers but that’s where it stopped. But not this time. in August I downloaded an app and attacked that treadmill. It took a few months but I stuck at it.

As I did C25K Adam changed my program from a general session to two different programs, one for upper body and one for lower. And I improved. I started out  dumbbell bench pressing 10kg weights, the little shiny silver ones. And that was hard. As I worked my way along the weights increased and my clothes size decreased. Suddenly I had definition, just slight, but it was there. And I kept on going.

By now Rae was as committed as I was – getting up at 5.00am to go the gym on week days so I started getting up and going at 6 when she got back. Neither of us will quit before the other, it’s fantastic motivation. In October I completed my C25K – amazingly I could run for half an hour. Even more amazingly I enjoyed it and stuck with it. Between Christmas and New Year we went away for a holiday and I jogged outside for the first time, 6K which is three times around Lake Victoria in Shepp. It was an incredible feeling. I went and bought new shoes especially for jogging and haven’t looked back.

It’s now March and almost the one year anniversary of this change. I’ve gone from 100kg to 76kg. I now dumbbell bench press 22.5kg weights and run over 5k without thinking. I still exercise six days a week; upper, lower and jog in rotation. I have gone from XXL to medium, gone from size 38 pants to size 32. When I started at the gym I wore oversized t-shirts to hide myself away. Now I only feel comfortable in sleeveless tops.

So what I have learned in this time?

Commit.
If you’re going to do it, do it, don’t make excuses. It’s hard work. No one wants to get up at 5.45am to exercise but that’s what you have to do. Stop making excuses, stop kidding yourself.

Eating.
Stop kidding yourself again. You know what’s good and what’s bad for you – stop eating the bad stuff. Yes, a little does matter so just don’t. Sure no one else will know but you will. I found using My Fitness Pal helped beyond words. Tracking everything that goes in is scary and it’s surprising just how many empty kilojoules there are in foods you know you shouldn’t eat.

Celebrate
Celebrate the little changes. You work hard, acknowledge it. That little bit of definition in your arms – wow! Being able to run to the corner to deliver a coffee to your wife before the bus arrives without running out of breath – go me!

Change Your View of You
This has been the hardest thing for me to do. I’ve always, and I mean always, viewed myself as fat, weak and not athletic. This hit home last year when we were watching a news item on the stair climb at the Eureka building. Rae realised I was thinking about it and asked me. I said “sure, but I’d have to get fit first”. She looked at me and said “idiot (or words to that effect). You are fit.”.

From a life time of seeing myself as the opposite I now have to change how I view myself and what I can achieve. I’m fit, possibly even very fit. It’s strange looking in the mirror and seeing someone who isn’t me, or the me I think I am. It’s a constant process of reminding myself.

Support
Having the support of Rae and the motivation she, and Adam, provide is priceless. Exercising and getting healthy is tough, you need someone on your side. Someone who sees the positives and encourages you to keep going.

It’s All About You
No one else at the gym cares. They’re all there doing the same thing you are – trying to improve, make themselves healthier, achieving their own goals. Never let the thought of what someone else is doing or may think of what you’re doing hold you back.

Aims
Have aims. Short term (today I will up the weights for this set), Medium (in a month I want to be jogging an extra two k’s) and long term (this year I want to do the Eureka climb). Getting healthy can become repetitive and boring if you let it, you need to have something to motivate you over the journey.

It’s Forever
This isn’t a phase. It’s not a temporary thing. As Rae says “this is how it is”. There’s no going back, I want to be this fit and healthy forever. I can’t look at old pictures of myself now without cringing and wishing I had started years ago. I’ve thrown out all my old clothes. I’m not going back..

So where to from here?

I’m happy with my weight now, in fact i want to put a little back on. I want to get a little more muscle too. I need to learn more about nutrition and food to expand the healthy choices I can make when it comes to eating.

I have a couple of aims for this year. I want to do The Age Melbourne Run, hopefully the 10k route so I need to start building up my distance for that and, yes, the Eureka stair climb is on the list. I think that will be tougher than the 10k run but I think I can do it.

Above all though I’m determined not to slip, never to go back. This is who I am now and what I want to be. 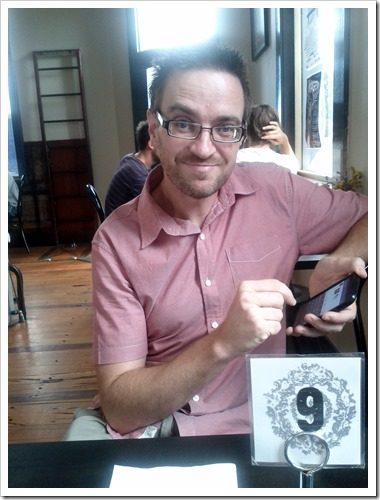