Rae has taken the kids down to the beach for a couple of days so I had a free night to do whatever I wanted. Movies? Television? Read? Nah, I decided to do something completely different – I went to the baseball.

I’ve driven past the baseball park in Laverton many, many times and generally commented on how it was in the middle of nowhere for sport and wondered how baseball could survive in Aus so it was even more surprising that I’d give it a go. I looked up the site for Melbourne Aces and bought my ticket online – I figured if I had the ticket I’d have to go.

The park is only 15 minutes drive away and I arrived in plenty of time. I got to watch batting practice and the preparations for the game. The crowd built slowly and by the time for the national anthem, an American tradition that has found its way to local ice hockey and baseball games, the stands were looking good.

Now I know nothing about baseball. About 20 years ago a catcher (?) from the Australian Olympic baseball team explained what a pinch hitter was but I was (possibly) a little tipsy at the time and the details of that conversation were lost by the next morning. I know about strikes, and bases and, um, foul balls but that was it. Surprisingly enough that’s all I needed. It was a great game to watch. I could follow the ebbs and flows, the score board made sense after a couple of innings. I got to see what I now know is a rare win for the Aces, including a spectacular triple home run. I even got to see a couple of bats explode. 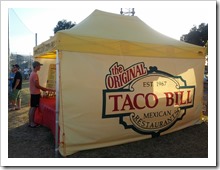 While the game was engrossing it was the atmosphere that really sold me. There was a group of diehard fans to my left who had chants for most of the Ace batters (my favourite was :”Biddle it, just a little bit:” to the tune of Wiggle It (Just A Little Bit)) and they were great to listen to. Lots of family fun with entertainment  on the field between innings. My only disappointment was the Taco Bill tent had run of burritos by the time I got there. Everyone at the game seemed to be having a great time.

I’ll definitely be going back, I’m not sure the kids would be interested enough to sit still for the few hours but if I could drag Rae along on a perfect summer night like last night I’m sure she’d enjoy it too. 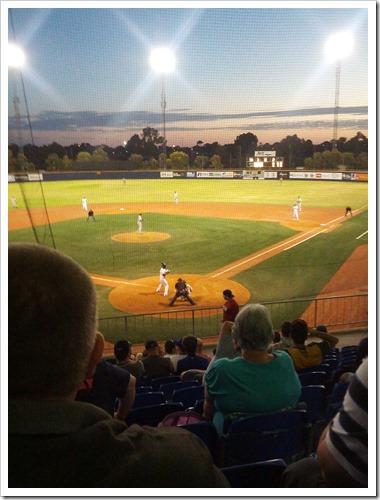