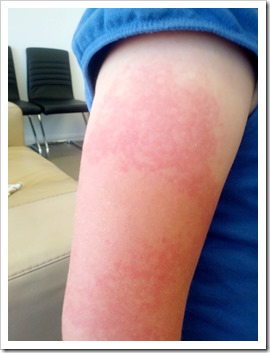 I went to pick up the kids from kinder today and as I was signing them out I heard a teacher say “Kennedy, let’s go and talk to dad.”. My fist thought was ‘oh god, what have she and [best friend] got up to?’ but shame on me, the poor thing didn’t look that well. Apparently after I dropped her off this morning a rash started on her wrist and grew up her arm  over the course of the day. I was surprised they didn’t call me earlier.

Then they showed me a piece of paper. Apparently Henry was doing a mountain climber impersonation, but a not a very good one. He had come a cropper on the climbing steps and has a wonderful graze next to his eye. 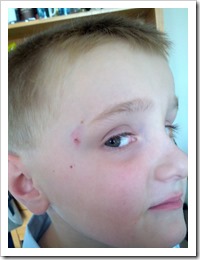 Moo was scratching and said the rash was burning so we ran next door, grabbed Bert from his class room "(“but dad, we have free time!”) and headed off to the doctor. We were lucky it was so quiet and we were seen almost straight away. He has diagnosed a contact allergy and prescribed some items to calm it down.

Now we start the process of elimination that may never end to try and track down what could have caused the rash in the first place. As it started soon after arriving at kinder we don’t know if it was something there or something here. As for Henry, if he’s like his dad then this may be the first of many such uncoordinated incidents.