It really was a nightmare on Friday the 13th.

Sitting at work in the morning I get an email from Rob, ‘So, should we go the game tonight?’. What on earth possessed me to say yes?

As we both cut back our memberships to home games only this year I had the experience of having to queue and buy a ticket for the first time. We managed to get seats on the ground level and settled in, along with 70,567 of our friends (including Jen), to watch the game. 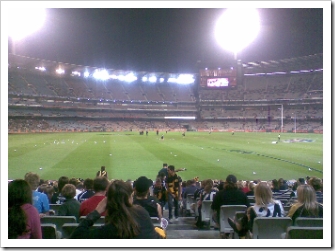 Well, I watched it for the first half. The second half I sat with my head in my hands waiting for the nightmare to end. But it didn’t. Three games in to season 2007 and I’ve all but given up hope now. You’ve had three years Mr Wallace if you, the coach, don’t know what’s wrong we’re really in trouble.

One Reply to “Ticket To Hell”